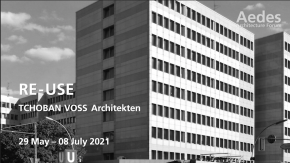 “Sergei Tchoban – Lines and Volumes” published by Park Books will be available during the exhibition.

Demolition or sustainable structure renewal and revitalization while preserving the design language and context? When a holistic approach is taken to a building’s life cycle, rehabilitation is clearly more sustainable in terms of ecology and energy use. Demolition always means a release of ‘grey energy‘ – the primary energy invested when a building is erected. TCHOBAN VOSS Architekten deal intensively with the subject of re-use and revitalization of existing buildings and present in the exhibition numerous different ways conscious and sustainable treatment of existing structures may not only preserve urban diversity but also develop it further, taking into account the relevant historical and urban-development context. The original function of a building determines the scale and structure in which a new matrix of uses and an architectural solution are created. National and international examples by TCHOBAN VOSS Architekten are presented vividly in an exhibition installation.

The architectural language of post-war Modernism has a substantial influence on how our cities look. Historically speaking, buildings, which were erected during this period and are now showing their age, often possess considerable significance but are for the most part not subject to conservation status. From the investor’s perspective, it often seems better economic sense to tear down an existing building and replace it with a new structure, although it has been proven that refurbishment is significantly more sustainable from an ecological and energetic point of view.

The approach of TCHOBAN VOSS Architekten

The office has been committed to sustainable and respectful revitalization for years, taking into account the history, architectural language, and role and impact in urban space of a building. This attitude and approach has been implemented in numerous national and international projects and was already the subject of The Java Tower, the first exhibition of TCHOBAN VOSS Architekten at Aedes in 1997. Growing appreciation of existing built structures and an increasing awareness of issues such as sustainability, resource conservation, efficient use of energy and space, and the circular economy have led to works of architecture currently threatened with demolition being increasingly considered for possible re-use, as the examples by TCHOBAN VOSS Architekten demonstrate.

After the revitalisation, the Berlin office building Ernst-Reuter-Platz 6 can once again assume its important urban role in the overall ensemble of the square. Central for the architects was not only structural, but also sustainability in design, the preservation of the architectural language of the building.

With its new façade, Blissestrasse 5 is an example of a contemporary, sustainable approach and a conscious engagement with the existing architecture from the 1970s that characterises the city of Berlin in this district.

The cube of the Nikolaikontor, built in 1959, had no reference to the historical urban context before the revitalisation. The premise here was to reclaim a building that reflects the historic urban structure while preserving the substance and at the same time providing a contemporary façade.

There is considerable potential in industrial zones from the 1960s and 1970s too, many of which are currently undergoing revitalization. At that time built on the peripheries without a direct reference to a specific urban-planning context, their shells can now be architecturally reinterpreted and put to a contemporary use.

For the Langenzipen commercial and residential building an abandoned industrial shell was further developed.

The shell structure of the former Rossiya factory in St. Petersburg was reused for the Benois office building.

The Aedes exhibition presents these complex issues of Re-Use in an informative, vivid and stimulating exhibition installation.

design, plan and build for national and international clients in the public and private sectors. With around 160 highly qualified, interdisciplinary employees and many years of experience, the company with its offices in Hamburg, Berlin and Dresden offers architecturally and functionally sustainable solutions for a wide variety of building tasks at home and abroad.