A Symbiosis Between Architecture and Context
Dorte Mandrup, Copenhagen 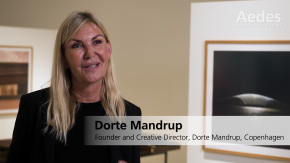 The uniqueness of each site, each landscape, each terrain is what the Copenhagen-based architecture studio Dorte Mandrup capture in their designs. The exhibition PLACE presents the strong interrelation between place and architecture through five site-specific installations. While similar in their function as museums and visitor centres they are fundamentally different from each other in concept, materiality, form, and texture, as well as in architectural expression. But still, they share the same vision, aspirations, and an ambition to give formal responses to the many challenges facing the world today. In addition to large-scale models illustrating the interplay between place and architecture from the marshes of the Wadden Sea, to the breathtaking vast scale of the Greenlandic landscape and the difficult memories of war, flight or expulsion imprinted in the ruins of the Anhalter Bahnhof in Berlin, a Wunderkammer displays an extensive collection of artefacts, materials, images, fragments, models and sketches that invite visitors to dive into the unique narratives that have informed the architecture. The exhibition focuses on the museum The Whale on the Lofoten Islands in northern Norway, the Exile Museum in Berlin, Germany, the Wadden Sea Centre near Esbjerg, Denmark, the Trilateral World Heritage Wadden Sea Partnership Centre in Wilhelmhaven, Germany, and Greenland’s Ilulissat Icefjord Centre.

PLACE gives insight into Dorte Mandrup’s work and explores the strong bond between place and architecture so evident in the studio’s body of work. The exhibition reveals the contextual potentials tied to finding sustainable solutions for the future and highlights that buildings never emerge in isolation. “Individually the projects might not seem directly connected. But together they express the contextual abundance that derives from allowing the place to inform the architecture – a richness in materiality, form, and function. In a time where we as humans have become a profound force of nature, it is increasingly important that architecture conveys something contextually unique and enhances the understanding and experience of each place. Not only when it comes to sensitive landscapes, but also the social, cultural, or economic framework,” says Dorte Mandrup, Founder and Creative Director.

PLACE invites visitors to explore the distinctive narrative of each place through two parts. In the Wunderkammer you step into a world of records, materials, artifacts, and sketches to unearth some of the stories and elements that have inspired the works of Dorte Mandrup. The Wunderkammer invites you to touch, discover, and connect with each place though this rich collection of fragments. From the creative chaos of the Wunderkammer, you step into the main exhibition, where five site-specific models illustrate the interplay between the characters of the places and the buildings that emerge from them. Each model is an artistic expression of the important connection between place and architecture.

Exile Museum, Berlin
Expected to open in Berlin in 2025, the Exile Museum highlights the ruins of Anhalter Bahnhof from where countless people were forced to flee during World War II. The new building will tell the stories of those driven into exile then, while at the same time shedding light on the millions of people displaced from their homes today. It highlights and embraces the remaining architectural fragment and creates a dialogue between past and present. The walk from the ruin of Anhalter Bahnhof into the museum resembles the one people would have taken to move through the portico into the entrance building and further out to the tracks – leading the visitor the same way as those who left for the unknown between 1933 and 1945. In the exhibition, visitors will get a unique experience of how the Exile Museum addresses this difficult history.

Wadden Sea Centre, Denmark
The Wadden Sea Centre, opened in 2017, emerges from a landscape characterised by endless horizontal lines, secluded farmhouses with thatched roofs, and a relentless western wind. A sculptural adaptation of the volatile reeds anchors and yet simultaneously distinguishes the building in the distinctive landscape. As the gateway to a UNESCO World Heritage Site, it conveys the history of one of the world's most unique and significant natural areas.

Trilateral Wadden Sea World Heritage Partnership Centre, Germany
In Wilhelmshaven on the north-western coast of Germany, a single, unmovable bunker is one of the few remains of the area’s naval military history. Appearing as a giant rock on the seabed it creates a natural anchoring point in the flat terrain and a perfect foundation for a new purpose of preserving and saving the valuable surrounding ecosystem. At night it becomes a shimmering and open lighthouse and provides views to the historical remains during the day. The centre is expected to be completed in 2025 and will house the offices of the joint Danish, German and Dutch Common Wadden Sea Secretariat (CWSS) and of the Lower Saxony Wadden Sea National Park Authority (Nationalparkverwaltung Niedersächsisches Wattenmeer, NLPV) that both work to protect the Wadden Sea area. 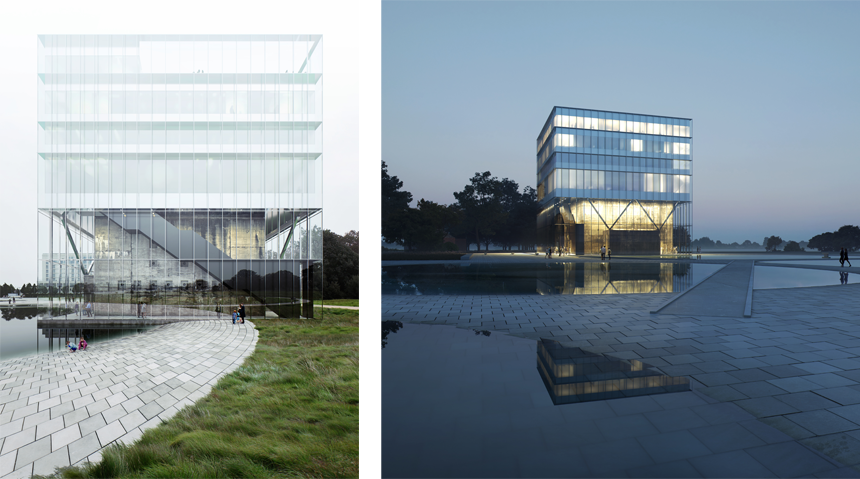 Ilulissat Icefjord Centre, Greenland
Like an outstretched wing gently touching the bedrock, the Icefjord Centre, completed in 2021, blends effortlessly into the vast terrain and offers a unique vantage point from which to experience the astonishing Icefjord and understand the dramatic consequences of climate change on this remarkable landscape. Designed as a year-round visitor centre and meeting place for local residents, companies, politicians, climate researchers and tourists, the centre houses exhibitions, a film theatre, a café and a shop as well as research and educational facilities. It tells the story of ice, of humankind and evolution on both a local and global scale. The rooftop is a public space – a kind of gateway between the town of Ilulissat and the wilderness beyond. The aerodynamic shape of the building prevents the build-up of snow, enabling the wind to swipe snow away from the facade.

The Whale, Norway
Frequently visited by migrating whales, Andenes is one of the best places in the world to experience these fabled creatures up close and The Whale creates the setting for a unique meeting between whale and human, nature, and culture. Inspired by the fact that the terrain above is a continuation of the landscape beneath, the Whale rises like a soft hill with a cavity underneath – almost as if a giant has made and incision into the crust of the earth and lifted it up. The curved roof forms a new public. The museum is expected to open in 2025.

Danish architecture studio Dorte Mandrup is internationally recognised for creating architecture in synergy with the context that enhances the awareness and experience of the place. Founded by architect Dorte Mandrup in 1999, the Copenhagen-based studio employs an artistic, humanistic, and scientific approach to create designs that are pushing the boundaries of form and materiality. Studies in both sculpture and natural sciences have influenced Dorte Mandrup’s approach to architecture, which has always been ‘hands—on’, materialising in deep contextual analysis and explorative prototyping, and is still a pivotal part of how the studio works today. In close interaction with every project team, Dorte Mandrup is solving complex problems and orchestrating designs that are playful, original, and poetic. PLACE is Dorte Mandrup’s second exhibition at Aedes Architecture Forum after HUMAN:NATURE in 2019.

Throughout her years of practice, Dorte Mandrup has received numerous honours recognising her contribution to the field of architecture. She is Adjunct Professor at The Royal Danish Academy of Fine Arts and holds frequent visiting professorships, this year at Mendrisio Accademia de Architettura, Switzerland. In 2019 she was chairman of the Mies van der Rohe Award. Dorte Mandrup was awarded Architect of the Year by the German Design Council – ICONIC Awards and was appointed member of the Architecture Section Award of Akademie der Künste in 2021.