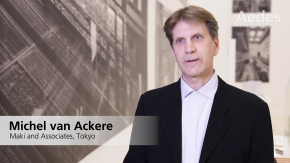 The Museum Reinhard Ernst, scheduled to open in spring 2023 in the city centre of Wiesbaden, is an 8,910 square metre facility exhibiting Reinhard Ernst’s private collection of abstract art. Funded entirely by the Reinhard & Sonja Ernst Foundation, the project is the culmination of a planning process beginning in 2010, and of the long friendship between Reinhard Ernst and Japanese architect Fumihiko Maki. The exhibition Making the Museum Reinhard Ernst documents the intense design and construction process via sketches, drawings, models, photos and artefacts organised under four general themes: Context, Form, Detail and Construction. Accordingly, the space at Aedes is divided into four quadrants that use a variety of materials to provide insights into this complex building project.

About the museum
Since the 1970s, Wiesbaden-based businessman Reinhard Ernst has compiled an extensive, important collection of more than 860 works of abstract art. For quite some time, he had a desire to make them accessible to the public. This gave rise to the idea of a museum for abstract art, which would exhibit works from the ‘Reinhard Ernst Collection’ as well as loans from other museums.

From this vision a specific plan was produced. In 2016, the Reinhard & Sonja Ernst Foundation submitted a proposal to the city of Wiesbaden to build and operate a museum at its own expense. After a public participation procedure and cross-party approval, a centrally located property was provided to the foundation based on a 99-year lease. For this period, the foundation will be in charge of maintaining services and financing the exhibitions. Aedes directors Kristin Feireiss and Hans-Jürgen Commerell point out: ‘We see an exemplary model in the way Reinhard Ernst and the city of Wiesbaden have managed this deal. In Berlin and elsewhere, museum projects of similar nature sometimes turn into monuments to the politically responsible at the expense of the taxpayer. This case is different.’

As an internationally appealing address for abstract art with art education for young people, a central meeting point with a restaurant, a museum shop, an event hall and a public forum, the intention of the Museum Reinhard Ernst is to enrich Wiesbaden and the region. As such, a passionate collector’s vision will create a contemporary house of culture for everyone in the year 2023.

Architecture by Maki and Associates
Reinhard Ernst was able to engage one of the most important international architects for the design of the museum: Fumihiko Maki. Ernst has been friends with him not just for many years, but for decades. The Japanese architect, born in 1928, was part of the Metabolist movement in the 1960’s and has already received many awards for his work, including the Pritzker Architecture Prize. Fumihiko Maki has built numerous museums and cultural buildings.

For the Museum Reinhard Ernst, Maki and Associates created a three-storey building that fits into the historic surroundings of Wiesbaden's city centre, yet is unique and modern. The ground floor with the entrance area is dominated by a fully glazed courtyard open to the top, which provides a lot of daylight and extends over the entire height of the building. In order to meet the requirements of the permanent and temporary exhibitions, the programme and the technical building services, Maki and Associates has divided the building into further quadrants that surround this inner courtyard. These simple stone-clad volumes, suspended and cantilevered above the glazed ground floor, exhibit a delicate balance of tension and compression forces made possible by the exacting calculations and specialized embedded steel connections from structural engineers Bollinger + Grohmann. Through this close collaboration, the design team successfully eliminated almost all freestanding columns from the building, enabling the generous interconnected spaces throughout.

On the interior, a generous three-dimensional public circulation network surrounds the courtyard. Targeted north-facing openings in the exhibition rooms also allow complex diagonal views through and across the museum at multiple levels. The architecture provides a clear wayfinding through the exhibits, but each visitor is free to create their own path. It is precisely this openness and layering of space that is a signature of Maki’s work, and here in Wiesbaden it is mobilised to connect the museum interiors to the surrounding city.

Sketch by Fumihiko Maki © Courtesy of Maki and Associates

Exhibition
The focus of the exhibition Making the Museum Reinhard Ernst is not on finished items or images, but on the work in progress – highlighting the acts of thinking, making, and construction, rather than presentation. Based on four thematic areas – Context, Form, Detail and Construction – a large number of sketches, drawings and models by Maki and Associates as well as artefacts and video material provide insights into the complex process of creating the new building. The exhibited items presented on the four thematic quadrants at Aedes will be supplemented by photos from the photographers Klaus Helbig and Frank Marburger, who have documented the making of the museum from the beginning.

About Maki and Associates
Maki and Associates – an internationally recognised architectural firm based in Tokyo – was founded by Fumihiko Maki in 1965 upon his return from over ten years of study, work, and teaching in the United States. The firm provides comprehensive services ranging from urban design and master planning, site planning and feasibility studies, facilities programming, architectural building and facade design, and interior design. While eschewing any particular style or aesthetic formula, Maki and Associates’ work has been consistently recognized for its high quality, humanistic approach to modern architecture. The firm’s projects have won numerous domestic and international awards, a testament to their ability to execute work to the same ambitious standards in a wide variety of settings. Fumihiko Maki’s career has been recognized with many of architecture’s highest accolades, most notably the Pritzker Architecture Prize (1993), the Praemium Imperiale (1999), and The American Institute of Architects Gold Medal (2011). 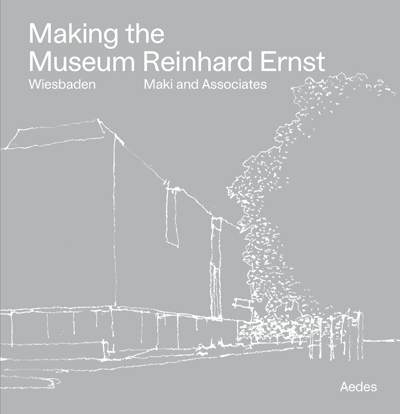