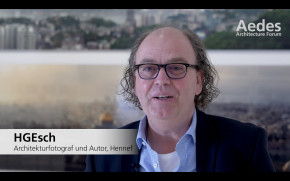 Opening hours
Mon 1–5pm, Tue-Fri 11am–6.30pm
A visit is possible with registration via aedes@baunetz.de or 030 2827015 and upon presentation of a negative result of a Corona test not older than 24h.

Booklaunches
HGEsch Advancing Horizons published by teNeues as well as Restlicht published by Wasmuth Zohlen will be launched with the exhibition.

Throughout this exceptional photographic juxtaposition, presented by the internationally-renowned photographer and filmmaker HG Esch, the exploration of transformation takes shape, based on two reoccurring themes in his artistic work. The transformations of the former administration building of the light bulb manufacturer Osram in Munich, the first open-plan office building in Europe, designed by Walter Henn and the transformations of global metropolises, presented in large-format panorama views.

In this photo series, Esch illustrates the eventful history of the Osram building in Munich, erected by Walter Henn in 1965 and instantly regarded as an outstanding example of modernism. These documentaries reflect the approach to architectural photography through the work of two generations: in 1965 by the Wolfsburg-born photographer and painter Heinrich Heidersberger, known for capturing the achievements of post-war technology in black and white images. With his photographs, he made a significant contribution to the dissemination of the architecture of the Braunschweig School. HGEsch’s photo documentations began in 2010 and continued in 2015, at a time when 800 refugees were housed in small living container quarters within the office space. Photographs of the demolition of the landmarked building in 2018 form the conclusion of the work. Despite his extensive efforts, the architect Gunter Henn, son of the building’s creator, was unable to purchase and restore the headquarters for his own firm. With the chronology of their creation, the photographs by Heinrich Heidersberger and HGEsch simultaneously document the lifeline of a historical building and a piece of contemporary significance.

The Skylines works by HGEsch inherently capture the process of transformation of the temporal, historical, and spatial change of the respective city. Esch’s positions, like Giovanni Battista Piranesi, the Italian artist and architect from the eighteenth century, calls for everything situated in front of an artist to be brought on paper- drawing or photograph. With his up to eight-meter-long, unembellished panoramas, the photographer wishes to avoid illusions, thus generating a relationship that is as realistic as possible between viewer and location. Photographed from roofs and always at a specific time of day, the subject of his compositions is the city as a whole. Meanwhile, the drone provides flexible viewpoints in photography as well as in film- though for HGEsch its use never becomes an end in itself. The photographic works, arranged as a panorama, are indebted to a central perspective; segments can be removed at any point and remain conclusive images on their own. What evolves are views of the cityscape, beyond that which can be predicted. Monitors provide valuable impressions of the artist’s film work.

Both themes explored in the exhibition House and Horizon encapsulate HGEsch's rich visual oeuvre in a comprehensive framework. The publication Advancing Horizons, published by Verlag teNeues, will be presented for the first time at the exhibition at Aedes. The publication on the OSRAM building entitled Restlicht, published by Wasmuth & Zohlen Verlag, Berlin, also deserves mention, including texts from Gunter Henn, Rolf Sachsse, Ursula Baus, Bernd Rodrian.

The Aedes Architecture Forum presented the exhibition City and Structure by HGEsch in 2009, including a publication of the same title edited by Kristin Feireiss. The exhibition 30 projects in 30 days - Henn Architecture photographed by HG Esch was presented at Aedes in 2010.