Two Sides of the Border: Reimagining the Mexico–United States Region 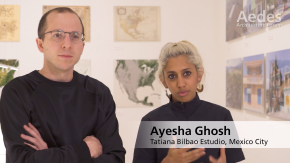 Reimagining the Region
Within the ANCB programme Borders and Territories: Identity in Place

Admission is free. Please register for the symposium at reply@ancb.de

To redefine border regions as an integrated whole is a critical challenge for architectural, political, and cultural institutions today. The exhibition brings together research and design results of an academic initiative, launched by Mexican architect Tatiana Bilbao in 2018. Interdisciplinary architectural and urban concepts of 13 participating architecture studios from universities across Mexico and the United States are presented on the basis of drawings, pictures and models. The approaches explore numerous topics such as migration, housing or natural resources—with a focus on one common region rather than two nations. In addition to a photo essay by Iwan Baan, new maps of Thomas Paturet highlight interesting spatial relationships of the Mexico–United States border which is characterized by a variety of cultural and economic similarities and a common history.

What if we stopped dividing the United States and Mexico into two separate nations, and instead studied their shared histories, cultures, and economies and acknowledged them as pieces of a single region? The current political climate exaggerates differences across the border, and at a moment when migration is at the forefront of political discourse and the North American Free Trade Agreement (NAFTA) is being renegotiated as the United States–Mexico–Canada Agreement (USMCA), the exhibition investigates the urgency of shifting the narrative.

‘Two Sides of the Border’ is an exhibition in the form of an atlas, a book that selectively draws space and defines regions in order to produce a preferred image. The new atlas presents three perspectives: projective, objective, and subjective.

- the projective atlas displays work from the 13 studios’ examinations which took on interdisciplinary approaches to study and propose projects dealing with cross border issues: migration, farming labor in Ohio and Kansas, and remittance houses in Mexico to name a few.
- the objective atlas shows new maps by Thomas Paturet, capitalizing on the assumption that maps have the capacity to dissolve North American borders by emphasizing other geospatial relationships. These are displayed alongside historic maps presenting 400 years of shifting borders in the region, destabilizing the collective imagination of the border.
- the subjective atlas is a photo essay by the photographer Iwan Baan who traveled to each of the studio sites to capture their changing landscapes and architecture’s role in these regional relationships.

‘Two Sides of the Border’ aims to redefine the region and simultaneously is a collaborative project that redefines North American pedagogy. The academic initiative fluidly spans language, borders, institutions and nationalities—all based on the shared interest in developing a comprehensive and unified imagination of the region.

The exhibition is initiated and conceptualized by the Mexico City-based architect and educator Tatiana Bilbao and is designed and curated by Nile Greenberg, NILE, New York. It is made possible by the support of the Yale School of Architecture Gallery, where it was originally on view.

Many thanks for support