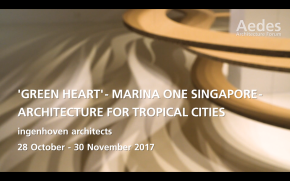 INTENSIFICATION OF PLACE
Marina One, an ecological niche in the city-state

The conversation will be held in english
Please register for this event at reply@ancb.deDialog at Aedes Architecture Forum
Thursday, 16 November 2017, 5pm

NEW ARCHITECTURE FOR A GREEN FUTURE
Climate protection—focus on building

The conversation will be held in german
Please register for this event at: reply@ancb.de

An Aedes catalogue will be published.

The "Green Heart" exhibition showcases the "Marina One" project by ingenhoven architects, which will open in the center of Singapore at the end of 2017. As an international role model for living and working, "Marina One" makes an innovative contribution to the discourse on mega-cities, especially in tropical regions, which, in the context of increasing population and climate change, face enormous challenges. The high-density building complex with its mix of uses extends to over 400,000 square meters and, with its group of four high-rise buildings, defines the "Green Heart"—a public space extending over several stories. This three-dimensional green oasis reflects the diversity of tropical flora. Aedes presents diagrams and interviews with project participants, as well as a documentary film on the architecture. The central element of the exhibition is a spectacular five meter high space sculpture which brings to life the unique shape of the "Marina One" buildings.

Today, more than 50 percent of the world’s population lives in cities. This number will increase to 70 percent in the next three decades. By 2050, the world’s population will increase to nine or ten billion. In urban agglomerations, this growth cannot be accommodated without high-rise buildings. The core concept for "Marina One", which consists of a group of four high-rise buildings, is based on a shared central space—the "Green Heart"—which was designed by ingenhoven architects in close cooperation with landscape architects Gustafson Porter + Bowman. The interaction between the geometry of the buildings and the garden facilitates natural ventilation and generates an agreeable microclimate. The largest public landscaped area in the Marina Bay Central Business District of Singapore provides living space close to nature, the usable area of which is 125 percent of the original site surface area.
"Marina One" comprises four high-rise buildings which accommodate office, residential and retail functions and have been rated under the Green Mark Platinum and LEED Platinum schemes. The two office towers each have a usable floor area of 175,000 square meters; the two residential towers provide 1,042 city apartments and penthouses for about 3,000 residents.

The organic shape of the building complex with its iconic louvres, and the generous planting, contribute to an improvement of the microclimate and increase biodiversity. Inspired by Asian paddy field terraces, the green center formed by the four towers—with its multi-story three-dimensional gardens—reflects the diversity of tropical flora and creates a new habitat. This "Green Heart" comprises over 350 different types of trees and plants, including 700 trees, on a landscaped area of 37,000 square meters. Various types of animal become part of this biological diversity.  Inspired by the natural climate changes at the different vertical levels of a rainforest, the landscape architecture mimics a green valley with its variations in climate according to level. Restaurants and cafés, retail areas, a fitness club, pool, supermarket, food court, and events areas on the different open terraces not only provide products and services to the residents, office workers, and visitors—they also create a place for social interaction.
The compact and efficient layout design is complemented by energy-saving ventilation systems, highly effective external solar screening devices, and glazing that reduces solar radiation into the building. Direct connections to four of Singapore’s six mass rapid transport lines, bus stops, bicycle parking facilities, and electro-mobile charging stations ensure that exhaust emissions caused by private transport are significantly reduced. The color scheme of the interior and the building facade features calm and earthy bronze shades in order to support the harmonious atmosphere.

A space-filling sculpture is the central exhibit in the Aedes Architectural Forum; it models the deliberate design of the building shape so that it can be fully appreciated. A documentary film of the building by architectural photographer HG Esch, interviews with project participants, and explanatory diagrams of the project provide visitors with new ideas for architecture in mega-cities.

About ingenhoven architects
ingenhoven architects was founded in 1985 and is one of the pioneers of sustainable architecture, having won numerous competitions and awards. Using the term supergreen®, ingenhoven architects pursues a comprehensive sustainability concept. The practice develops and builds projects of any size and typology in almost all parts of the world—all in accordance with the highest green building standards such as those of LEED, Green Star, BREEAM, DGNB, and CASBEE. In 1997, the practice achieved international recognition with the RWE tower in Essen, one of the world’s first ecological high-rise buildings. Since 1997, ingenhoven architects has been designing the Stuttgart 21 underground railway station. A number of award-winning high-rise building projects were completed in Singapore, Japan, and Australia. At its head office at Düsseldorf’s port, the practice employs about 90 architects, draftsmen, and model builders of 20 nationalities. In addition, the practice maintains international branches in Zurich, Sydney, Singapore, and Santa Clara (CA).

English/German
€ 10
To the catalogue order 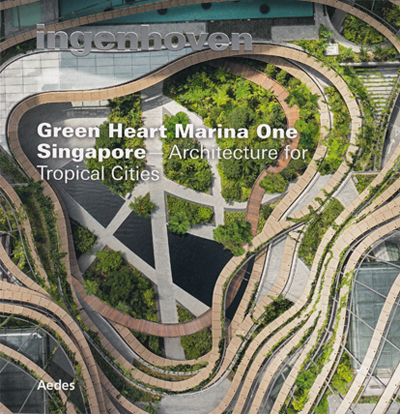