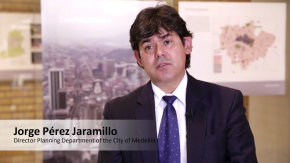 Taking a closer look at contemporary practices in the architecture and urban planning of Latin America, Aedes Architecture Forum in Berlin explores the forms of knowledge creating in Medellín, Colombia through a comprehensive insight of a twenty-five years recovery. Following the last Aedes exhibitions about urban spatial practice in Latin America of “Paraísópolis, São Paulo“, “Downtown Bogotá, My Ideal City” and “Torre David, Informal Vertical Communities”, Aedes returns to South America to learn from a city that transforms knowledge and skill into a vision for social equality and prosperity.

Celebrated as the most "Innovative City 2013" by the Wall Street Journal and the Urban Land Institute, Medellín is the quintessential symbol for urban metamorphosis. In May this year the city won first price in the Global Holcim Award 2015, for the transformation of a water reservoir into a public park. What makes this a reference model lies as much in its exceptional public facilities and infrastructure, as in the city's socially driven, progressive urban policies and bold formats for cooperation. “Medellín: Topography of Knowledge” is an exhibition and programme that will investigate and disseminate lessons from the Medellín Model, bringing together the diverse range of actors behind it.

Over the last years, the city received attention and praise for leaving its crime-ridden years behind, and transforming itself into an international reference for urban innovation. Bold and fresh, recent public architecture proposes an inventive model to split costs and share benefits in order to promote civic life. In a country of alarming inequality, these educational projects initiate physical and cultural processes of knowledge creation that use public amenities to challenge norms and bridge the disparity gap. Medellín is developing an urban ecology of high social purpose, under the premise of collaborative urbanism and civic symbolism. The so-called ‘Medellin Model’ is as much about creativity as it is about coalitions, teamwork and an intense participatory process. These striking and inspirational endeavours conceal unusual partnerships between the public sector, private entities, the academic-educative field and architectural offices.

Beyond sculptural architecture and daring infrastructure, the exhibition shows how the city spearheaded a campaign against violence and poverty that led to an exciting reawakening of public life. ‘Medellin, Topography of Knowledge’ is an invitation to look more closely at the complex, yet transcendental example of development that defines the City of Eternal Spring as both a design destination and a model for collective urban processes.

The exhibition will explain the “topography of knowledge” while locating key projects into three main urban landscapes. Geographic maps, urban infrastructure and planning guidelines will give an overview about the landscape and the surrounding conditions as well as recalling Medellín’s transformative journey over the course of the last few decades. Through photographs, diagrams, videos and drawings this topographical layering captures strategies, architecture and infrastructure as well as the visions of the city’s newest masterplan passed earlier this year; which is geared towards regenerating the river, prioritizing sustainable mobility and controlling sprawl around the periphery.

The exhibition was conceived on the initiative of the Aedes Architecture Forum in Berlin and was conceptualized and prepared in cooperation with the Aedes team, Andres Ramirez and Beate Engelhorn, as well as the ACI, Medellín around the director of Urban Planning of Medellín, Jorge Pérez Jaramillo.

We thank the Embassy of Colombia in Germany for cooperation. 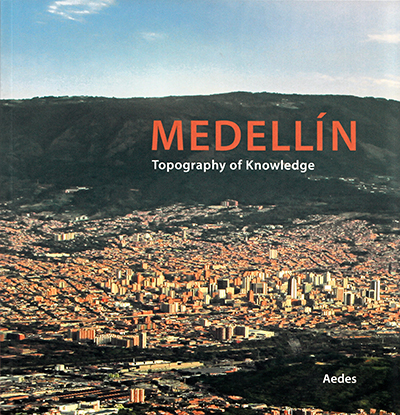